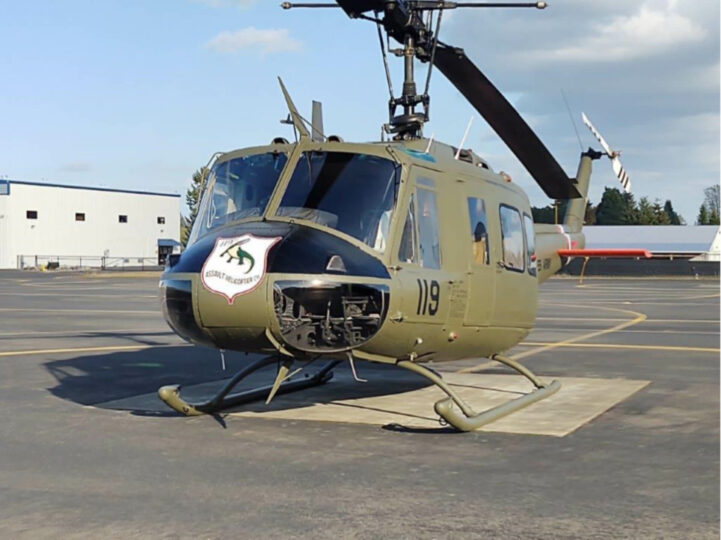 The Bell UH-1H, better known as a “Huey,” is a manufactured helicopter that was used for many duties throughout the Vietnam war. It was commonly used for training purposes, search and rescue, communications jamming, and airborne radar-assisted surveillance.

Flown by MO1 Donald C. Glauthier for the 119th Assault Helicopter Company which was a part of the 52nd Combat Aviation Battalion, this Huey has been confirmed to see combat. On August 1st,1966, Glauthier’s Huey underwent fire from enemy personnel whilst transporting external loads from Camp Holloway (Central Vietnam). Luckily, MO1 Glauthier and his Huey came out on top and survived the ordeal.

If you are interested in acquiring a unique piece of history from the Vietnam war, contact us today! Platinum Fighter Sales is the #1 Warbird and Vintage Aircraft Broker because our passion for warbirds exceeds our competition.

Continue reading to learn more about the Bell UH-1H and its history.

From September 1962 to November 1970, the 199th Assault Helicopter Company flew for the 52nd Combat Aviation Battalion in Central Vietnam. Using their own unique nicknames for radio callsigns, they went by “Alligator,” or just “Gator” for short.

The UH-1H was the far superior helicopter by 1969, as all UH-1D Hueys and below were upgraded to 1H operating status. These helicopters would often fly in the high density-altitudes and received a much-needed powerful engine buff.

To support the Vietnam Helicopter Pilots Association (VHPA) and its members that served in the 119th Assault Helicopter Company, please visit VHPA.org.

From Vietnam Machine to Movie Star

This Huey has been fully restored back to its original condition and has been in many airshows and movies. Being rebuilt by Northwest Helicopters INC., the UH-1D certainly did gain popularity.

If you’re an avid movie buff, you would have been able to see this particular helicopter in the movies X-Men, Only the Brave, and Kong: Skull Island. Having been taken so well care of, this UH-1D Huey is still certainly up to any task.

If you want to own a piece of Vietnam history, the Bell UH-1H “Huey” Helicopter is a great investment that will surely elicit an emotional reaction. Feel free to call us at 800-210-1951 or reach out to us on our Contact Page.

Learn more about the specs HERE and check out some great photographs.