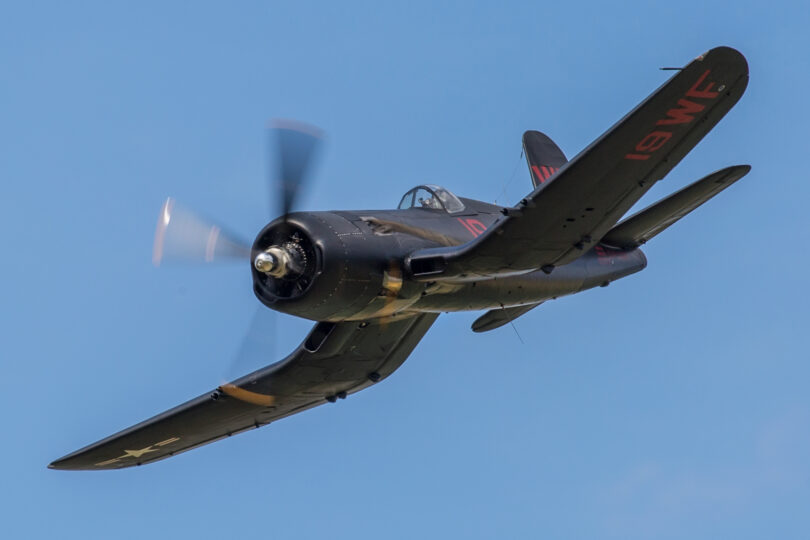 During The Korean War, a unit of marines listed as VMF-513 was formed to perform night-time air defense in their F7F “Tigercats” and F4U-5N “Corsair” warbirds. This group of Marines would soon be known as “The Flying Nightmares” for their master night-time aviation skills.

Coined by LtCol James R. Anderson of the USMC in 1951, The Flying Nightmares were known to fly their black-painted F4U-5N warbirds to blend in with the night. Their legend struck fear into the minds of the enemy as their talent became known.

The squadron began flying out of Pusan West (K-1) Air Base in March of 1951. They were providing the only night fighter air defenses at the time. Further, they would even provide interdiction support to all UN forces.

They were very busy. The squadron cumulatively logged 2,086 flight hours in a reported 604 night-time combat sorties in the very first month. Being highly successful, they inflicted severe damage on the Chinese Force’s tactical and logistical units.

In the summer of 1952, the squadron made history by accomplishing the first night-time radar kill. Maj. William T. Stratton Jr. and MSgt Hans Hoglind managed to shoot down a North Korean YAK-15. The squadron is credited for 10 successful night-time dogfight kills.

It is presumed that out of the 15 F4U-5N warbirds that were in use by The Flying Nightmares, only one still exists and is fully operational. After it was retired from the U.S. service, it was sold and used by the Argentine Navy.

In 1966, the F4U-5N was retired and was donated to their Naval Museum (El Tigre) where it stood as a gate guard. There she lay until 2009 when she was purchased by Max-Alpha Aviation and fully rebuilt to The Flying Nightmare specs with a new engine, propeller, avionics, fabric, and coat of paint.

You Can Own This Piece of History

This one-of-a-kind warbird is available for purchase if you are interested in owning a piece of history. Visit the F4U-5N Page to learn more about the warbird or give us a call at 800-210-1951 to speak to one of our aviation professionals.